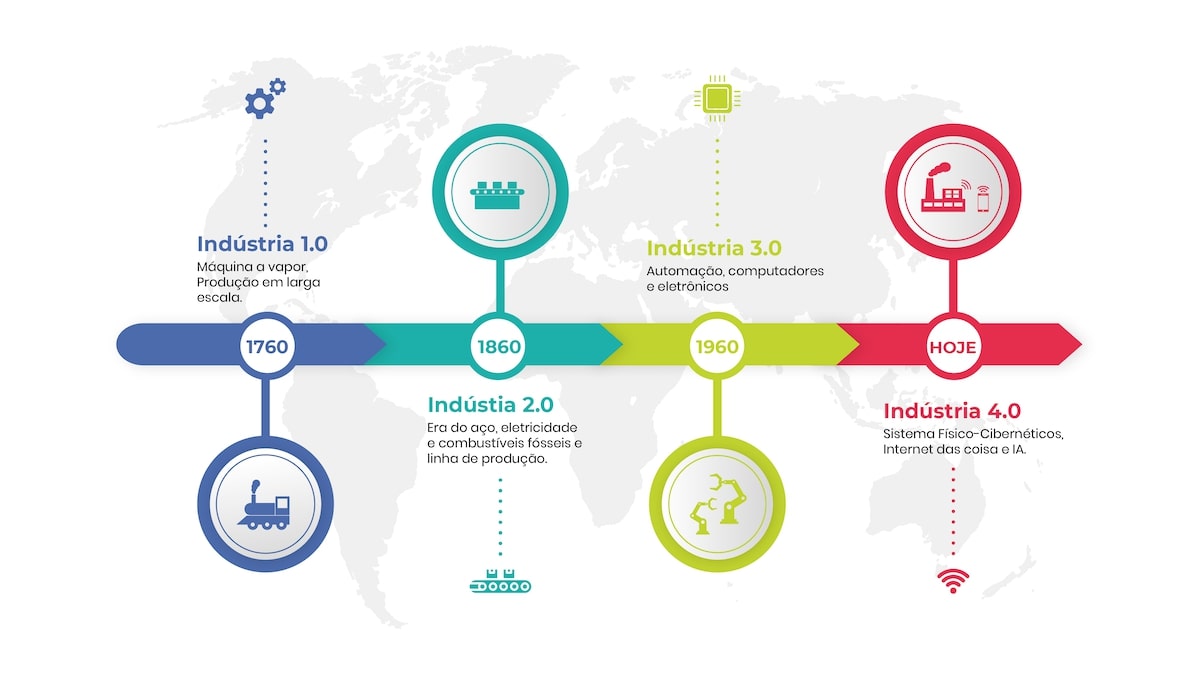 Automation. Smart factories. Interactions between man, machine and the digital world. Quality and efficiency. Innovation. Resource savings. Preservation of the environment. This is Industry 4.0 - The great revolution of manufacturing processes of our era.

Industry 4.0 is also known as the Fourth Industrial Revolution, and its history follows the manufacturing industry from the earliest days of industrial activities to digital transformation and beyond. The future of industries is already present!

A BRIEF HISTORY OF THE INDUSTRY

Of all the potentials that give humans a differential over other animals, the most evident is probably the ability to make choices. Coordinating our efforts for a goal. Creating tools for large-scale jobs. Solving increasingly complex problems and more efficiently. This is the great achievement of human evolution.

From the agrarian and mercantile society of several centuries, we move on to handicrafts and manual production, until in Europe of the 18th and 19th centuries there was a set of changes in the socio-economic panorama that came to be called the Industrial Revolution.

The First Industrial Revolution arose around 1760 in England and introduced the use of machines to assist workers in the production of more diverse and larger-scale goods. The industry was born! Water and steam-powered machines were particularly important for the textile sector and the creation of new transport. Small businesses that served a limited number of customers went to large hierarchical organizations serving a larger number of people.

It was technology being applied to jobs assigned to an individual.

The Second Industrial Revolution took place from 1840, expanding from England to other countries such as Germany, France, Russia and Italy. New technological systems have been introduced, such as the use of steel, superior electrical technology, the use of petroleum-derived fuels, the invention of the explosion engine, the steam locomotive and the development of chemicals. Electrical machines replaced water and steam based machines. At the beginning of the 20th century, assembly lines appeared, which have become standard practice to this day. Productive management techniques have been refined. Many call this the "Technological Revolution".

It was the technology would be applied to the jobs assigned to an entire process.

From the innovations of this period, the manufacture would exceed the capacity of the individual work, and the dimensions of the batches produced would be impossible to be carried out without the machines developed. The Second Industrial Revolution is the basis of today's industries.

THE ADVENT OF COMPUTING

During World War II, the first machines capable of performing mathematical operations much faster than human capacity were developed. The first computers and the emergence of electronic devices, such as transistors and integrated circuits, and the programmable logic controller (PLC) first built in the 1960s resulted in the following decade in a new era of automation, known today as the Third Industrial Revolution, the era of electronics.

Innovations of the digital age included computers, faxes, mobile phones and the Internet itself.

It was technology at the service of automation of individual jobs and manufacturing processes, but still dependent on human interventions.

When you think about innovation, why not combine physical and human work with the digital world? The Fourth Industrial Revolution was on its way to Industry 4.0.

In general terms, the term Industry 4.0 covers a set of contemporary technological innovations arising from a project of strategies of the German government. It was initially used at the Hannover Fair in 2011, and its final report consolidated in April 2013 by the working group chaired by Siegfried Dais (Robert Bosch GmbH) and Henning Kagermann (German Academy of Science and Engineering).

We're in the age of smart machines. Cybernetic physical systems (CPSs) enable smarter, barrier-free and virtually unlimited communication between machines. The human control hitherto necessary for manufacturing and logistics can be suppressed in systems that can exchange information trigger actions autonomously.

Cyber Physical System (CPS): Innovation that paved the way for Industry 4.0, is every mechanical device executed by computer-based algorithms. The association between compute, network, and physical processes for your real-time administration, as determined by the user.

Internet of Things (IoT): An immense network that interconnects data entered by people with embedded machine devices and vehicles with computerized detection, scanning, and monitoring capabilities. This interaction also allows greater understanding of customer needs and improvement of services. It also makes it possible, for example, to improve communication between autonomous cars that are part of urban traffic.

Cloud Computing: External network hosting and data backup. The services transmitted over the Internet allow the company to no longer have an IT structure in its unit, and these are divided into three categories: Infrastructure as a Service (IaaS), Platform as a Service (PaaS) and Software as a Service (SaaS).

Additive Manufacturing or 3D Printing: Use of various processes to replicate 3D objects in physical form, through the addition of material by layers, instead of using parts modelled by dies in specific molds.

Synthetic Biology: A  new interdisciplinary area that involves the application of principles of engineering, chemistry and other sciences  to biology, to design and produce complex molecules and biological elements that often do not exist naturally. Production and combination of new DNA sequences is one of its applications.

Although in its early stages, the new era of contemporary industry paves the way for increasingly diverse advances. In addition, the possibility of technological interventions that make manufacturing costs lower, added to the resource savings for the environment, show that Industry 4.0 is likely to be the way of manufacturing for years to come.

Industry 4.0 innovations may advance to even broader technology horizons, reconciling machine performance with human creativity. Could the Fifth Industrial Revolution already be on its way? Some believe that the advance to an  Industry  5.0 begins when it is possible to allow customers to customize what they want, and that future would be guided by the return of human hands and minds to production, improving the means and efficiency with the machines.

"The wind blows and the boat walks, and it's not up to us to stay in the same place."